I created this worksheet to help us go through the things we need to cover for Bear Necessities (Bear) and Call of Wild (Wolf). We have a combined Wolf/Bear den right now. I wanted to make sure we touched on each of the things we were going to cover. I figured a worksheet will help me keep focuses. 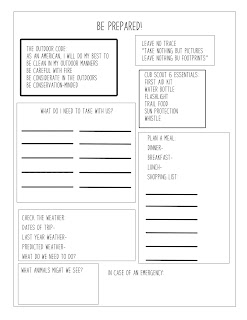 Next week we are going "camping". Not actually camping but we are going to meet at a local picnic area. While there we are going to set up a ten, use the grills to roast marshmallows, and having a short campfire service. We are also going to tie knots, look for wildlife, and clean up using Leave No Trace.

Hi! This is unrelated but I was wondering if there is any chance that you would post the remaining verses of I Feel My Savior’s Love in ASL. Your post of the first verse is PERFECT - just my speed. Thanks!!