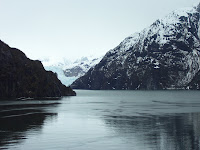 Cory's parents were so generous and gave us an Alaskan Cruise for our Honeymoon. It was a 7 Day Princess Cruise, in a room with a balcony. 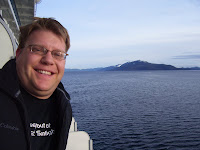 Alaska is COLD and BEAUTIFUL. If someone would have told me (before I knew I was going to Alaska for my honeymoon), that I would have a May honeymoon, and FREEZE, I would have thought they were crazy, Arizona is HOT already in May.
Cruising is the way to go. I would have never thought I was that type of person. You know the type who takes cruises. I've had friends who took cruises and they thought they were grate and raved about how much fun they are, and I would smile and nod and think they were crazy, after all being stuck on a boat never sounded like much fun to me. However, since Alaska is so remote, I figured the best way to see it would be by cruise and then this came up. Bless were we. 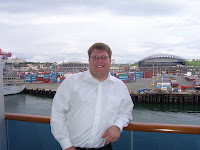 Top reasons why Cruises are amazing....
1- One Price Shopping, ALMOST EVERYTHING is included in the price of your cruise
Your room, your food- all you can eat, and Fun
2- They wait on you hand and foot, Everyone is waiting to serve you
3- There is so much to do or not to do if you decide
4- Completely relax with nothing to distract you
5- Amazing Views and where else would you get to see them
6- Unique opportunities for shore activities 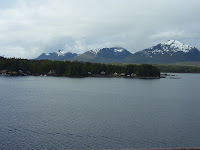 I could go on but that is not what this post was going to be about.
I am here to tell about my Honeymoon in Alaska. Well we sailed from Seattle. I had never been to Seattle before and although I still haven't see much of it, our bus driver got 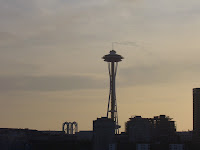 lost from the airport to the dock so I saw a back by the coast neighborhood look at Seattle. Cory and I couldn't help but notice that the houses were mostly painted much brighter colors than houses in Arizona. We determined that is because they brighter colors make the gloomy sky less gloomy. Our first two days (leaving and the next day) were spend at sea, meaning no shore stops. The waves were not bad on feeling on the boat, but were cool to see and watch the white caps on the breaking waves. The stops we had were Ketchikan, Juneau, and Skagway. In Ketchikan we didn't schedule any shore excursions with the cruise because we decided we could see it by foot cheaper and easier. We hiked to the fish hatchery and the Totem Museum. I did a lot of research before we went trying to decide what excursions were deals and which ones were rip-offs. I determined the most of the excursions were actually good deals and when they were more expensive it 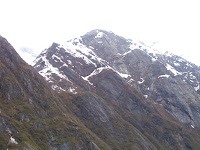 was only by a few dollars, the assurance that they won't leave without you and having a tour guide is almost always worth the extra dollars. But for Ketchikan we decided not to go with the tour group and it ended up being a really good idea. We had the whole exhibits all to ourselves because all the tour groups had just left. In Juneau we had planed on taking a shore excursion that had a plane ride to a lodge on a glacier (the Teku lodge-something like that) and we were going to have a salmon fish fry. We were so disappointed because when we got to Juneau it was raining really hard and all flight excursions were canceled. That excursion came highly recommended too. 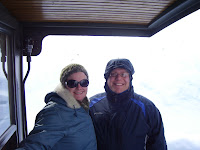 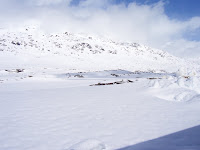 But no rain in Skagway meant we could ride the train up the Yukon. We did the Jewel Garden/Train/Yukon Bridge tour. I would highly recommend that one to anyone. All of was so picture perfect. We were in awe over all the snow (yes Arizona kids). Overall Alaska is amazing. We so want to go back and see it all again, but there are a few other places on list before we do that one again. Like the Mediterranean.
Posted by Arizona Girl at 10:38 AM