Teaching: How Firm A Foundation

Update:
I mentioned this in my 'Activity: I Lived in Heaven' blog, but I wanted to mention it here also. I am going to work this song a little different then just tell them the line, we sing that line, and then sing it again (maybe a few times) before learning the next line.
Since this song will be different for the children, I am going to start by having them humm and then la la la the melody. After that will will say together all the lines a few times before we sing them. Then I will start into my normal routine. We'll see how it all works. I am going to start teaching it next Sunday (Jan 25th).

How Firm a Foundation:

I wanted to make sure I finished this plenty early before Feb. For a few reasons 1- I wanted to be able to share my idea before hand. 2- I will be out of town for two Sunday’s in Feb 3- I hope to use some of the Sunday’s in Jan to start teaching this song.

My idea consisted of trying to build a foundation. So each of the words are on what I wanted to look like a brick. I am debating making something to be mortar between each layer. With words I could think of something to help the children (especially the little ones that can’t read), I tried to add pictures for those words. Each brick is half a piece of construction paper tall, and most are a construction paper wide. 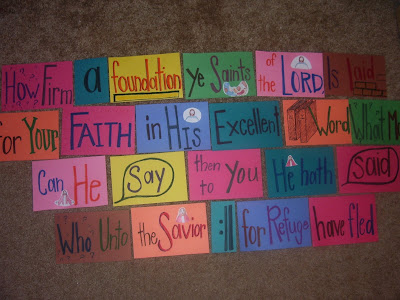 I plan on using the magnets to hold the bricks to the chalkboard. 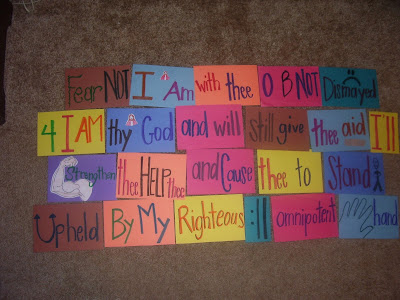 I am worried that the few pictures I did use, are too small. Also I really wanted more pictures but I either couldn’t find pictures small enough to fit on the brick, or I couldn’t think of a picture to go with the particular words. I hope all ya’ll can find better pictures to use.

I am also debating having the words go up instead of the traditional down. That way I build the foundation up. I think the children can handle the non traditionalism, but I haven’t ever tried it so I don’t know. Has anyone else ever tried this method?

the educator in me is screaming don't do them from bottom to top....it will mess up all the young readers but particularly the kids who have reading issues....please please don't....

Thanks for the super idea! I love it! I will follow your example!

Hey I'm Wendy from Sydney Australia! This idea was GREAT! I did it with my primary and they were singing SO loud. When they entered the room i gave them each a word and they had to figure out where it went. And when they got it i started taking some away. They actually were begging me to take away all the words. So i challenged them to sing without words and without me singing. they were awesome! So I'll be doing it again with the 3rd verse next week! thank you for your ideas! they are a huge help!