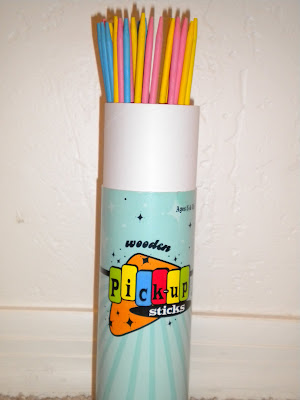 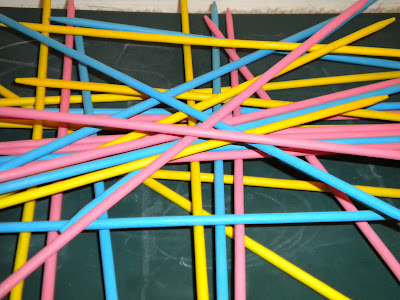 I found these wood Pick-Up Sticks at Target over a year ago. I've been trying to decide HOW to use them during a singing time. Although I am not entirely thrilled with my concept- in all this time I haven't thought of anything else. Anyone out there- What would you do for a Singing Time with Pick-Up Sticks?
Here is what I am planing on doing tomorrow with SR primary. (I don't plan on doing with with JR primary because there are way too many sunbeams who do not have the coordination to play Pick-Up Sticks.) I might later do it with JR primary and just have them draw the sticks blindly, instead of actually playing pick-up sticks with them.
I took out the green and the black, only leaving the pick, orange (looks like yellow), and blue sticks. Various boxes come with different colors but they should all contain the same number of sticks (10 of each except black there is only one). That way there are 30 sticks that we are playing with, after all there is noway we are going to go through 30 songs.
As state previously, I am going to have the SR primary actually play Pick-Up Sticks. For any of you out there that haven't played or don't remember how to play here is a brief description: First you will place the sticks on the table (I know for the kids in the back it will be really hard to see, but that is the nature of the sticks), a child will come forward, they get to choose a stick and try to pick it up without making any of the other sticks move. If a stick moves then they have to put the stick back and return to their seat. If the successfully pull the stick out of the pile, then they get to do whatever the color they pulled out allows.
This could be done with the Jenga/Tumbling Tower blocks (or a wannabe). Instead of the color code you could just have a mystery jar, and if the child pulls it out successfully then they would get to draw from the jar. I'm sure there are lots of other games out there that could use this concept ( a basketball hoop, ring toss, Operation). So we'll see how well SR primary does this activity tomorrow.
The SR primary got really into playing this game. But I was (and I think the children were too) surprised just how hard it actually was. In some ways this made them get more into it because it was even more of a challenge, but it also made it a little less reverent. We then ended up singing less songs than normal because it took about 4 children to come forward before one of them successfully pulled out a stick. If I was to do this again I would put the sticks down with more outlying and easier to pull off.
Posted by Arizona Girl at 3:44 PM