Digital Scrapbooking is a thing for me. I enjoy doing it.
Created this LO for a site's challenge and thought I'd share it since it represents our year 2012 really well.


I have a whole blog dedicated to my digital scrapbooking. Check it out http://scrapingarizonagirl.blogspot.com/

Yes better late than never. Here is our Christmas card and our family newsletter.

Posted by Arizona Girl at 11:40 PM No comments:

Festival of the Arts

My sister's family made an impromptu visit down to us the weekend of the 9th and 10th of November.
In trying to find something to do that  we found out the the Holy Trinity Monastery in Saint David was having their annual Festival of the Arts.

My sister and I had considering driving there before to visit the grounds and decided with this event it was perfect timing.

There was great food, a petting zoo, lots of crafts and local businesses.

We all had a great time. It was quite cold but we managed anyway.

Posted by Arizona Girl at 6:03 PM No comments:

When I was asked to sub the other Sunday I had an idea and thought it would be fun to make the Christmas songs into brain teasers. I didn't have it ready and I did find some on the internet
http://jokelibrary.net/xOtherAtoM/b_to_e/c4-puzzle/puzzles.html
But they weren't in a format ready for Primary. So I did something else with the children.
But it was still on my mind. I played on my photoshop and came up with the following.
Yes some are almost exactly from the above website. However many are not and there are a number of primary songs. Can you figure them out?
Even if you're not a Primary teach I hope you can enjoy these.
1. Angels We have Heard on High
2. Away in a Manger
3. Christmas Bells
4. Far Far Away
5. The First Noel
6. Joy to the World
7. Oh Little Town of Bethlehem
8. Oh Come All Ye Faithful
9. Once Within a Lowly Stable
10. Picture a Christmas
11. Samuel Tells of Baby Jesus
12. Shepherd's Carol
13. Silent Night
14. Stars Where Gleaming
15. When Joseph Went to Bethlehem

If you're going to use them in Primary, you don't have to use all of them. Just use which ones you want. I also thought they might be fun to put on a wall for a ward party and let people guess.
Download each one by Saving the image onto your computer


OR
click
HERE TO DOWNLOAD AS A ZIP
for all the pictures at once.
IF anyone has issues with the zip file PLEASE let me know
This is the first time I've done a zip for others to download.
Posted by Arizona Girl at 8:14 PM 1 comment:

We spent Thanksgiving week and weekend up at my parents in Mesa.

We had a great time.

My brother has a new girlfriend. She is sweet and a really good sport.

All the cousins got to play.

Grandpa works from home and find time to play with all the grandbabies.

Uncle Ted still thrills my children by playing the piano with them.
We had a great time.
Happy Thanksgiving
Posted by Arizona Girl at 4:43 PM No comments:

I so thought I had blogged about these already I made them back in 2008.
I am the sub for Singing Time on Sunday since Thanksgiving weekend our chorister is going to still be out of town. She said to pick a Christmas song and teach it to the children.
She appologized that she didn't have any of the visuals I had made because when our ward was split all that stuff had to go to the other ward. So she has nothing. I thought hey I made them once I'll make them again. So I got on my blog to look them up so I could have something to look at and I couldn't find them. I had to go through our old photos from our old hard drive to find them.
First:
I made a Nativity scene from construction paper and then had it laminated. To give you an idea of size

Joseph is about 9 inches tall. The brown part of him is all one piece, just cut and drawn on.

I used it for "Once within a Lowly Stable", "Shepherd's Carol" and the Nativity Song.
I pointed with a stick at the character in that part of the song.
I used it for "When Joseph Went to Bethlehem". I had a path that lead to it on the chalkboard and a "workbench" on the far side of the path.
I also used it by putting stickies on it, had the pieces on the table, children picked a piece and then we placed it on the board created our Nativity picture as we sang different carols.

Next:
Joy to the World

"Joy to the world"
"The Lord has come" ---use picture from library of the 2nd coming, nativity would work too

"Let every heart Prepare him room"

"And Saints and Angels Sing...."
all just made out of construction paper and markers.

Each verse was a page. Not too thrilled with my pages, a little too busy. If I was to do it again I'd probably do 1 verse to 2 pages, with less words written on the pages.
We then did the chorus in Sign Language.
Here is the link to my youtube video of the chorus
I love teaching Christmas songs to the children.
If you're looking for something really different. You'd need to get permision from your Primary President, but last year my mom and I wrote a Christmas Children Song called
Counting Christmas
click above and you can download the song.
These are the words:
ONE little baby sleeps on the hay in a manger far away.


TWO earthly parents watch Him sleep as their night long vigil they keep.
THREE wise men follow the light of a star shining bright
Bringing gold and frankincense and myrrh as they travel through the night.
FOUR shepherds hear the angels sing above, and they go to witness God's Love.
FIVE lowly animals make not a sound as the shepherds gather around.

I wrote it with the idea in mind of singing it with children and counting the 5 on their hands.
Have fun singing Christmas Songs!
Posted by Arizona Girl at 9:08 PM No comments:

We went up to Mesa to go to the Temple and spend time with my family during General Conference Weekend. 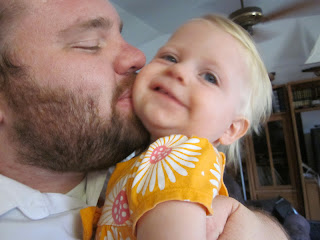 Our children love their Uncles. 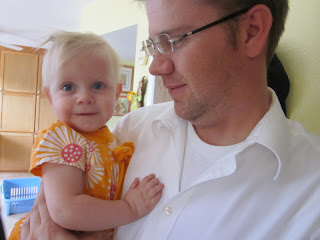 Before going home we went to the Train park in Scottsdale 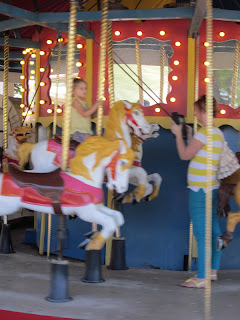 We all had fun at the Train park 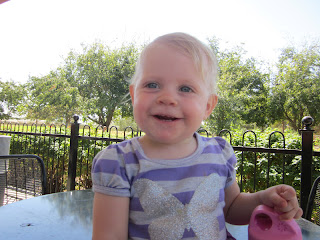 It was cooler than the middle of summer but it was still a warm day. 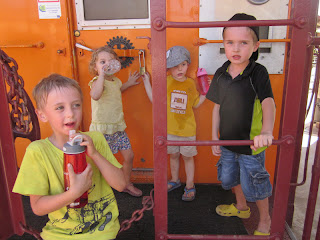 Posted by Arizona Girl at 9:01 AM No comments:

Girls are Now One (15 months exactly)

I can't believe I haven't posted about the girls' birthday!!! I am a bad blogger. Bad Blogger (slap slap) 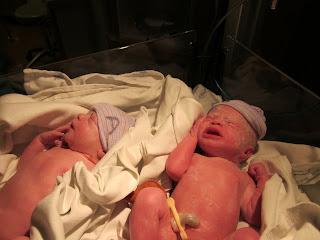 wow the girls are one (by now they are 15 months!) They were so tiny and now are so big and walking and are into EVERYTHING 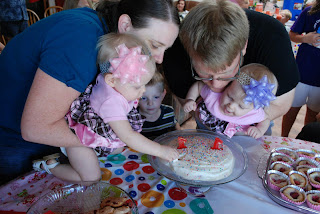 they were so cute with their bow headbands I made. 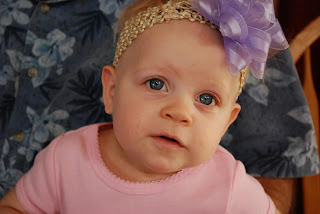 the girls loved being the center of attention. 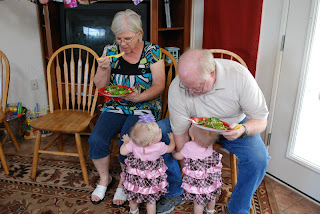 begging food off of everyone 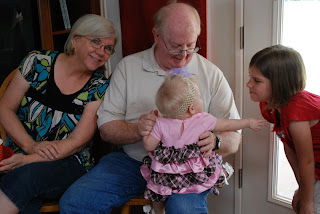 getting loves from everyone 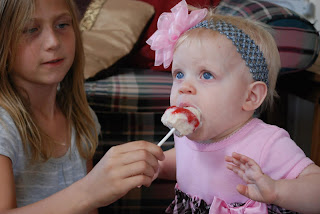 Both loved the cake 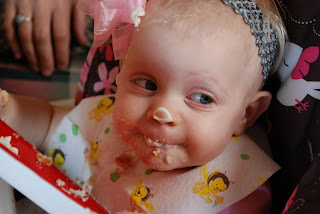 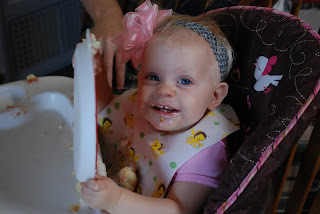 and their new toys 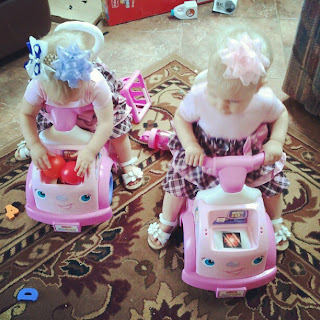 We had so many family and friends come to celebrate this day with us. 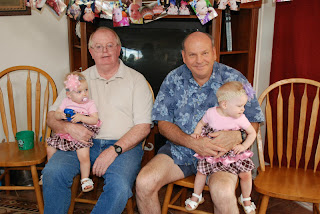 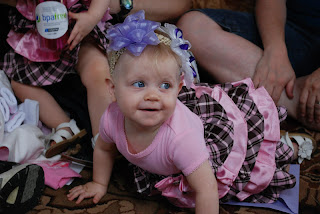 All the foods were made from scratch and had strawberries. 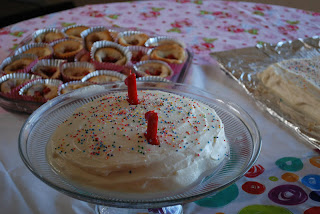 Here is how they look today at almost 15 months. 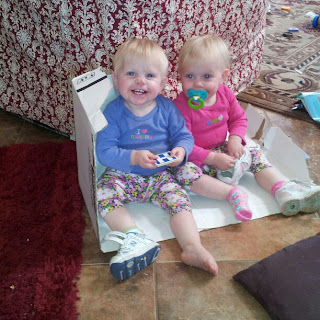 Posted by Arizona Girl at 7:00 AM No comments: