On the church's website, in the music section. They have video displays of various songs in ASL (There are some in the Hymn book section, the link goes to the primary one). This made me so happy to learn so now I don't have to tract down the many ASL interpretors I know and fun out how to say everything. I have enjoyed so much sitting and watching them. It is already giving me some ideas for next year's songs.
Fun little sign language thing I do with nursery already and will do with the children come next year, is for singing the chorus to "Follow the Prophet". For the chorus have both hands in fists with your thumbs up (like little people), have your left one slightly in front of the right hand. Start with them close to your body and slowly push them away (as though the right hand is 'following' the left hand). Its really simple and gives the children a motion to do and occupy themselves while singing- they love it.
Posted by Arizona Girl at 11:09 PM No comments: 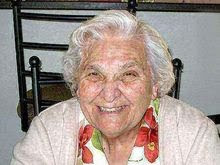 My husband's grandmother, or MeMere, passed away September 30th. It's part of the reason that I haven't made many posts lately. I was trying to put some of my thoughts together and I also was hoping to get some pictures from my mother-in-law from the family gatherings. MeMere had lived a full life. She was from Massachusetts, and although she had lived in Arizona since 1969, her accent was still noticeable. I met my husband's family for the first time, while we were dating, when I went with my husband to his cousin's wedding. It was Christmas time. The whole family was very welcoming of me but MeMere took the cake and inviting me to the family Christmas gathering in a week's time. And she would not take a no or a maybe as an answer. My attendance was a must. Over the last two years I had become to know her better. She was always smiling. It was the essential to her personal fashion statement. She was also very devote in her faith. Raised a Catholic and raised all her children to be active Catholics, she was a regular attendee at mass. I admired this in her. I also wanted so much to share with her the Restored Gospel of Jesus Christ. The night after her passing during family prayer my husband prayed for his MeMere who was in the spirit world to hear and accept the fullness of the Gospel. I was very touched by this. It had never occurred to me to pray for them. I pray for friends and family members all the time that the day will come that they will want to learn and be prepared to learned about why my religion is more then just a social organization for me. I don't know why it had never occurred to me that praying they will will accept the Truth is something that I could do to help them.
Last year my Grandpa passed away. It was a different experience for my husband to attend a LDS viewing and funeral, since he was raised Catholic. Being raised as a member of The Church of Jesus Christ of Latter-Day Saints (LDS) I had only ever know LDS funerals and going to a catholic funeral was very different. Both the viewing and the funeral for a member of the LDS church is an time to celebrate and remember the passed on loved one's life, and to be reminded of the beauty of the Plan of Salvation, and that families are forever. In contrast, the viewing was much the same, but the funeral was not much of her life. It was just a mass, that the scriptures were a bit more appropriate for a funeral. For me, this is not offer closure. MeMere met Pepere while they were both serving in the Navy during WWII. Because of her years of service (which I totally think is awesome), there was a gun solute and she was buried in the National Memorial Cemetery. The few moments at the cemetery offered some closure. But all in all I think that the reason I didn't feel that closure was the lack of being spiritually fed that I am use to at funerals. All of my in laws are wonderful, righteous people, who are a sure faith in Jesus Christ. Sometimes I have to remind myself that they are not already members of The Church of Jesus Christ of Latter-Day Saints. I know their faith is a big part of who they are, but I desire so much to share with them that there is more. That the fullness of the blessings and truth of Christ's gospel were lost over the ages, and that they were restored through Joseph Smith. That the Book of Mormon does not replace the Bible and its truths, instead it is a companion to the Bible reinforcing the truths therein and clarifying doctrines that have been misunderstood due to lost information. My faith in Jesus Christ and His plan for us, is the most important thing to me in my life. It is what makes me love my family more. I love my in-laws, as I said before they are such wonderful people. I love them so much that I want them to be with me for eternity just as I will be with my family. I pray for the day that I can share these truths with them and hopefully they will recognize the truths. MeMere was a true example of charity in her life. I hope that when I pass away the same can be said of me. I too pray that she will be given the opportunity to hear and understand also.
Posted by Arizona Girl at 11:20 PM No comments:

Primary Program ALL Over

Yippy!!! I am so happy its all over. The program is the bane of my calling. But the children did wonderful. There is something to be said for the fact that children sing and behave so much better when they have an audience. They will be so rowdy for every practice and then be almost perfect while their parents are watching. The songs all went well. I had to laugh over the Sunbeams special musical number, "Jesus Wants me for a Sunbeam." They did wonderful, didn't jump and were all such good little singers. But what was funny was all the other children were so jealous that the Sunbeams got to sing that song and they didn't.
After the program I did my "Happy Family" lesson. Both primaries loved it, they got into it for different reasons. JR had more fun actually saying the new words and singing them. While SR primary had the most fun trying to guess what language the words belonged to. They had were really getting into singing the fun tune. For a primary activity day coming up we are do a theme of "Children Around the World". It should prove to be really fun and cute. After today's lesson the primary president asked me to keep my visuals so that I can use them again for the activity day.
Again I am so happy we are done with the program. Now I have to decide all what we are doing for the rest of the year and for next year.
Posted by Arizona Girl at 11:01 PM No comments: 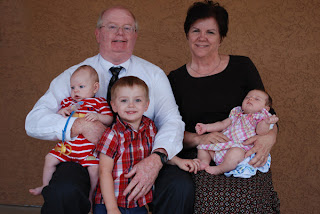 Sunday is our program. I am going to be sooooo HAPPY when its over. After the program I want to do something that is completely different. Sing songs that we haven't all year long. I'm going to teach them "A Happy Family" song. As I teach it I'm going to show pictures of my family. Instead of just learning the song as it is written we are also going to learn how to say mother/daddy, sister/brother, and grandma/grandpa in other languages and substitute them in. I've been asking our ward for help.
Example of what we are doing: 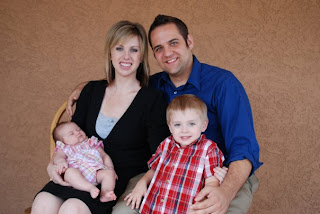