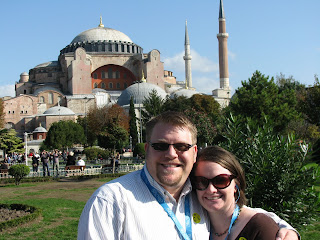 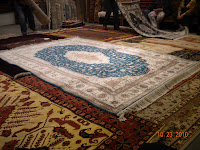 It was Sunday in Istanbul. We thought that visiting these historical Mosques and Churches would make a great Sunday activity. The only down side to that was Turkey has their "day off" on Sunday to be the same of the western world. So all the stores were closed. More stores were closed on this Sunday than you find in the States, even in Utah or Florida on Sunday. What does that say that a mainly Muslim country (and big city too) is honoring the Sabbath than Our Country that is founded by Christians on Christian values and where apx 75% of Americans consider themselves Christian. That is a sad commentary on our religious values in this country that a Muslim country, even inadvertently, honors the Sabbath more than we do. 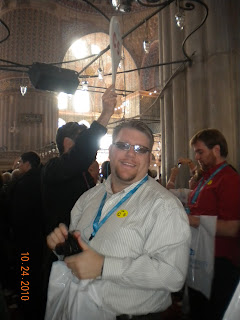 Putting that aside, we had chosen the shore excursion: Blue Mosque, Hagia Sophia, and Bosporus Lunch Cruise. We started our excursion by being dropped off at the site of the ancient Hippodrome, a place for chariot races under the Byzantine Empire.  There really isn't much to see there, but some obelisks. From there we went to the Blue Mosque. It was impressive inside, but I was actually more impressed with the exterior than the interior. Everything I had read said that they require women to ware a head scarf to enter, but they didn't. So I don't know why that was. They had them there available, but didn't require them. 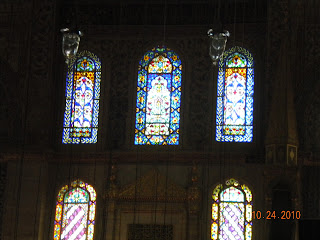 We then walked across a park area to the Hagia Sophia. This place is huge. From a distance it didn't look as large as it was. I was taken back a little by that. It is a massive building all in total. I don't know if it was just that my sister is a Mid-evil History Major and talked it up so much that I was more interested in it, or the art History books I read before leaving, or that they have been removing some of the Muslim artwork uncovering the Byzantine Christian artwork from the days it was a Christian Church, exposing artwork that was lost to the world for centuries. Brief history of the Hagia Sophia. The building that stands there now is the 3rd church building to be on that site. The first two met fates of fire. It was a Christian church for all 3 of those churches. When the Ottomans took over, the church was converted into a Mosque. All the iconic Christian art was covered up with plaster and decorated with Muslim artwork. 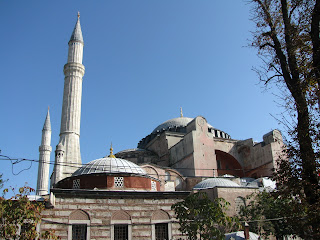 In the 1935, it was converted from a Mosque into a Historical Museum. Since then, there have been efforts to remove the plaster in some places to restore the art underneath. There are plans to leave some of everything visible so that visitors can see what it has been. So here is my concern, if removing the plaster destroys the Muslim artwork that is also historical a part of the meeting, then should they be removing. I don't know how they are removing, but to destroy it is a shame. Along the same lines, how do they know that the mosaic they are uncovering is the mosaics most worthy of being uncovered? These are all questions that I have not received answers to. So the mosaics they have uncovered are beautiful. I loved seeing them. But I couldn't help but wonder about the questions I've posed. 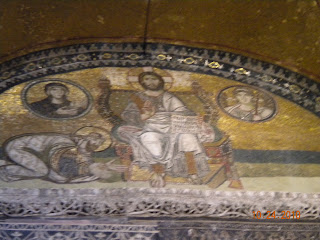 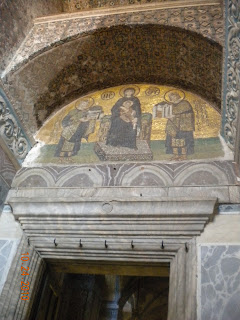 When we were done visiting the Hagia Sophia we went on our Bosporus river cruise and lunch. Up one side and down the other. We thought that this would be the best way to get to see the bulk of the city. So our lunch. I did not know that eggplant was such a huge part of Mediterranean cooking. I knew they used it more than our cooking but I had no idea that it was used so much. It was everywhere in the food. The reason this is important is because I'm allergic to eggplant. I know its an odd food to be allergic to but its the only food I'm allergic to. In Italy it was on the pizzas, on our lunch cruise on the Bosporus it was in everything, and there was no alternative. So upon being informed the chef has to make a completely separate meal for me. All in all I had to get use to asking everyone each time I got food, "Does this have eggplant in it, I am allergic to eggplant." I had learned to say eggplant in Italian, I should have learned to say it in Turkish, Arabic, and Greek. Oh well, I lived, and its not like eggplant could kill me, it just causes me to break out in hives. 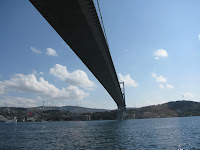 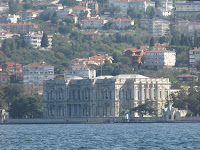 Lastly we went to the Topkapi Palace. Where the Ottoman Sultans lived. In truth I didn't see much there. We only went to a few places within. They are very grand. 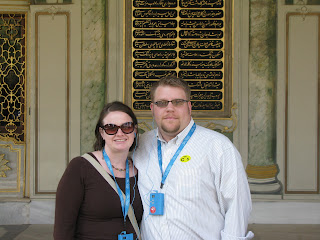 That raps up Istanbul. Impressions- it was very clean and orderly (most clean and orderly of all the places we visited), it is a shinning example of how western cultures and middle eastern cultures can live cohesively. I was most impressed with it as a whole than anyone one place (but the Hagia Sophia is a close 2nd). I would love to visit Turkey again someday.
Posted by Arizona Girl at 7:57 AM