How it went:
So it went much better than I thought it would. The children, especially the younger children really enjoyed drawing the pictures- they were extremely proud of their artwork and wanted to show it. They got much more into this activity than the older children.
In the end this is what I did: 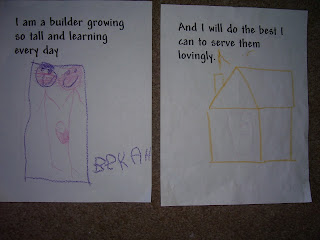 JR--- we only drew pictures for the first verse. I gave all the children in the same class the same line to draw. Since we have more than 4 classes some classes had the same picture. I tried to give the same to two smaller classes. Then we had one child from each line come forward and hold their pictures up. Everyone else would stand in their own spot while their line was being sung and hold their picture up. Then we switched out the children in the front for other children who drew for that line and sang it again. Since there were no pictures drawn for the chorus-everyone stood, sang and held up their picture. We were able to sing through the song 4 times before singing time was over. The first time through the concept of standing at their seat was lost, however the more times we sang it they understood and had fun, everyone was standing. 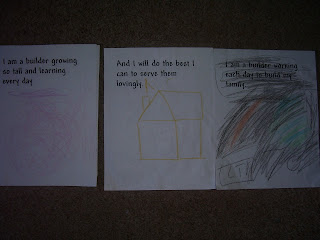 SR--- we did both verses. Each child got two pages, one from each verse. I mixed the lines up around the room as much as possible. Although they handled the two pictures well enough, I think I was a little confusing doing both verses at the same time. Having a child come to the front to hold their picture was the most confusing of all- it made for a little disorder. Other than that I was extremely happy with how well it went and how much the children enjoyed it.


Give then children about 5 minutes to draw their pictures. While they are coloring have the pianist play “My Eternal Family” over and over.

Don’t waste too much time having the children draw pictures.

The idea of a focused activity is to help cement the song in their memories. It is to give them a second way to associate with the song besides the way you taught the song originally. During this time you want to sing it as many songs as possible.